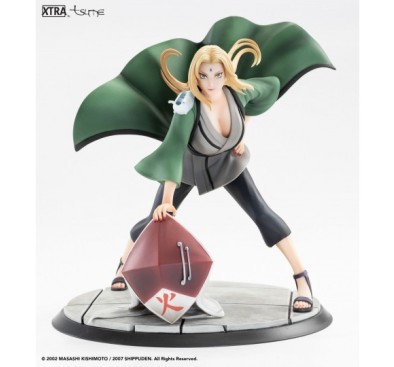 This Xtra by Tsume of Tsunade perfectly transcribes her fiery personality as well as her playful temperament. Indeed, we observe the legendary ninja very sef-assured, picking up her white and dark red hokage hat showing the red kanji symbol of fire, her left hand resting on her hip. Her big hazel eyes reveal all her determination, while her pink lips draw a playful grin. We then observe the tilak in a blue diamond shape in the middle of her forehead: a chakra seal she put on after leaving the village. Her long blond hair tied in two ponytails on her back as well as the two shorter locks framing her face are thrown back, as she leans sharply to retrieve her hat. Her green jacket lifting up, we note the kanji Kake symbol (賭 signifying Bet) written on her back, reminding the inveterate player she is, a character trait she inherited from her grandfather. Very playful but also very unlucky, she is nicknamed the Legendary Sucker. Tsunade wears her gray kimono edged with black lines and tied at the waist with a thick blue belt, cropped pants of the same color, as well as purple sandals with heels. We then notice the red varnish carefully applied to the nails of his hands and feet. Finally, it would be difficult not to notice the gray slug with a dark blue back, placed on her right shoulder! Indeed, the Konoha's fifth Hokage has signed a pact with slugs, allowing her to summon the queen of slugs: Katsuyu! Thanks to the ubiquity gift of the latter, able to separate into many small independent slugs but sharing thoughts and experience, Tsunade can protect a large number of people at once by broadcasting her chakra, or transmitting information and orders over long distances ... Trivia As you can see on this figurine, Tsunade is not wearing her necklace. Indeed, the Legendary Sucker gave it to Naruto after challenging him to master Rasengan in a week. By achieving this, he would win her precious pendant… 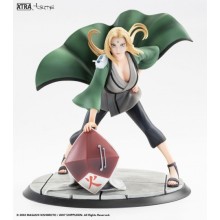 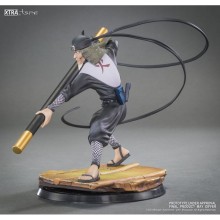