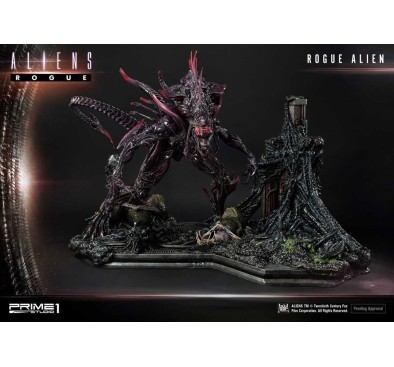 Prime 1 Studio is proud to present the latest edition to our Premium Masterline Series, The ruthless Rogue Alien Battle Diorama from the Aliens franchise! The Xenomorphs are an endoparisitoid extraterrestrial species with no higher goals than the propagation and self-preservation of their species. The Rogue Alien, also known as the King Alien is a Xenomorph-Human hybrid genetically engineered during Project Chimera. It is no ordinary Xenomorph however, it in fact has a passionate hatred for them. The Rogue was created as a control mechanism to counter the powerful Queen Alien, one that could be controlled by man. The Rogue Alien is an extremely hostile creature. While somewhat tame to humans depending on their threat level, it has no control over its blinding rage to kill other Xenomorphs. The Rogue Alien is depicted here on a base inspired by a ship overrun by Xenomorphs. Furious, the Rogue charges off killing everything in its path to get to the Queen Alien. Notice its aggressive stance, both mouths open in a full roar. The Exclusive version even features the slaughtered body of a Xenomorph in it's left hand, displaying its barbarity and ferocity. We have implemented the upmost attention to detail in the body of the Rogue and incorporated the ominous feel of the Aliens franchise in this masterpiece to bring you the best representation of Aliens on the market. The best thing about this Non-Scale Diorama is it can be displayed closely with the mighty PMDHAL-03: Queen Alien, recreating the exact iconic moment of confrontation between King and Queen. A must have for Aliens fans everywhere and an excellent addition to your collection! Product Specifications: - Size approx. 66 x 98 x 69 cm - One (1) Aliens designed theme base w/ Warrior Aliens & Ovomorphs - Can be displayed with PMDHAL-03: Queen Alien (Sold Separately) Limited Edition. Please note: Due to the size of this item, additional shipping costs may apply. Apart from your location, the actual package size and weight is needed to determine those costs. Both are unknown at this point and may not be available until the product arrives in our warehouse. 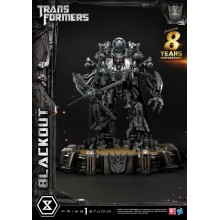 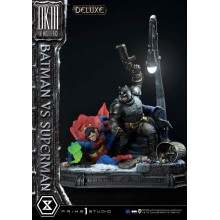 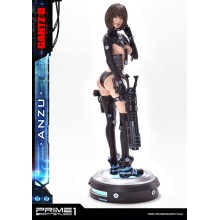 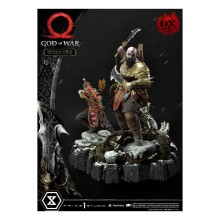