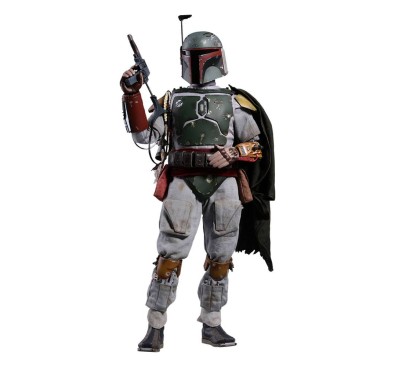 Armed in customized Mandalorian™ armor, dangerous weaponry and highly trained combat skills, Boba Fett has earned a notorious reputation as one of the deadliest bounty hunters in the galaxy as he takes on contracts from the criminal underworld and the Galactic Empire. Boba Fett has been a fan-favorite character since his introduction four decades ago in Star Wars: The Empire Strikes Back. Today, Hot Toys is delighted to re-introduce the Boba Fett Sixth Scale Collectible Figure as an addition to Hot Toys' Star Wars: The Empire Strikes Back 40th Anniversary Collection! Based on his famous appearance in the beloved film, the Boba Fett collectible figure features a meticulously crafted Mandalorian helmet and armor with distressed effects, his iconic jetpack, a cape, detailed blasters, and a display stand! Furthermore, this sixth scale collectible figure features an alternative version of Boba Fett's armor including a range of interchangeable parts such as helmet, jetpack, gauntlets, cape, and a number of gloved hands all packaged in specially designed retro style packaging! Join the hunt and embrace the 40-year legacy of this cinematic masterpiece. Don't miss out on this great Boba Fett collectible figure for your Star Wars: The Empire Strikes Back 40th Anniversary Collection!