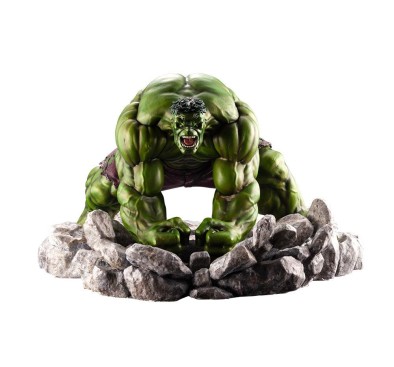 The fourth entry in the elite ARTFX Premier series is the Hulk! This 1/10 scale statue was crafted down to the finest detail using digital sculpting, giving this expertly crafted collector's piece an exquisite appearance alongside lifelike detail. The craftsmanship in this piece continues from the sculpting to the painting. Unlike other pieces which follow the pattern of a simple base coat with shading. ARTFX Premier re-evaluates the standards for figure painting. Each individual piece of the statue is layered with several types of paint, giving the finished product an unprecedented sense of beauty and depth. The ARTFX Premier rendition of Hulk is based on the 2018 Immortal Hulk comics, which pays homage to the character's roots. The statue depicts the transformed Bruce Banner delivering a powerful Hulk smash to the base on which he stands. The statue's powerful posing and realistic detail fully capture the Hulk's wild and unbridled strength in his transformed state. In order to give the statue an overpowering sense of power beyond the likes of which can be seen through the monitor of a computer, the initial prototype of the statue was created using clay. The model was then scanned and transformed into 3D data, allowing Kotobukiya's craftsmen to fine-tune the details such as the texture of Hulk's skin and shredded denim trousers. The intricate craftsmanship of this piece continues from the sculpting to the painting, with a multi-layered paint job that highlights the level of detail that has gone into the piece. This rendition of the Hulk offers not only the weight and volume of a scale rendition of the character, but an attentive level of detail that offers quality alongside quantity. Like the other Avengers before it, the statue comes in sophisticated packaging overflowing with elegant details, including a marble inspired motif as well as an original illustration based on the figure. Additionally, these limited edition statues will come with a certificate that includes a collector number printed in gold, certifying each piece as a one-of-a-kind original. Limited to 3500 pieces worldwide. Please note: Due to the small edition size and the great demand for this item, allocations are possible.

Court of the Dead Premium Format Figure Shieve: The...