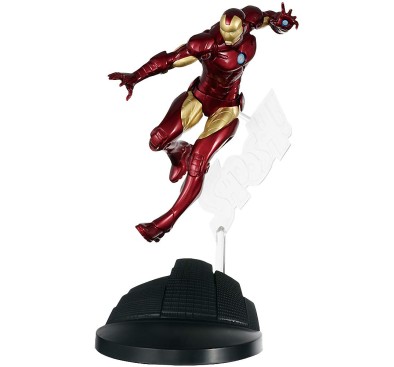 In this series of collectibles from Banpresto, Creator (Sculptor) and Creator (Photographer) collaborate in the design of these figures to create cool art displays! It is the ultimate figure – one that every sculptor wants to make, and every photographer would want to capture - combined to give you the best of both craft and detail. The Creator x Creator figures could only be found in Japan's UFO Catcher games, and are difficult to get the exact figure you want. The collaboration series, Creator X Creator, has collectors anxiously awaiting the next release! With renowned figure sculptor Takamatsu Seishin and photographer Hotkenobi working together, this duo takes on the popular Marvel Comics superhero — Iron Man. A wealthy American business magnate, playboy, and ingenious scientist, Anthony Edward "Tony" Stark suffers a severe chest injury during a kidnapping. When his captors attempt to force him to build a weapon of mass destruction, he instead creates a suit of armor to save his life and escape captivity. Later, Stark develops his suit, adding weapons and other technological devices he designed through his company, Stark Industries. He uses the suit and successive versions to protect the world as Iron Man. Although at first concealing his true identity, Stark eventually declared that he was, in fact, Iron Man in a public announcement.