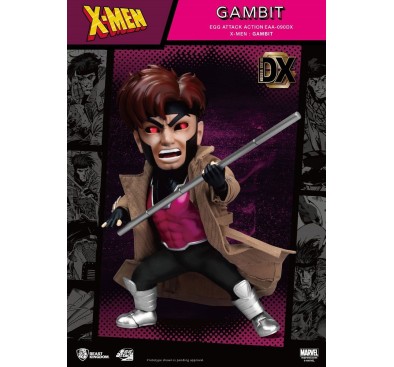 Gambit, the Cajun with an attitude is one of X-Men's coolest characters. Remy Etienne LeBaue, AKA Gambit first appeared in the 1990's Uncanny X-Men #226. A mutant himself, he has the ability to control and manipulate pure, kinetic energy, charging his weapons including playing cards and his bo-staff into powerful projectiles. Beast Kingdom, The Entertainment Experience Brand is back again with latest in X-Men Comics Egg Attack Action stylized action figures. This 6-inch Gambit, the newest addition in the EAA Marvel Comics lineup includes real elasticated cloth for both the tights and trench-coat, making it perfect for those mid-air poses! With 26 points of articulation, a host of accessories including charged playing cards and the infamous bo-staff, this Gambit figure is ready for any type of action!As a fan-favorite Beast Kingdom collectors can choose between a 'Regular'or 'Deluxe DX Version'. For the ultimate experience, the DX Version Gambit includes one additional face-sculpt along with a battle damaged painted Sentinel Robot Palm as an amazingly detailed platform for Gambit to show off his skills. So don't forget to take home your EAA Gambit today and join the rest of the X-Men in the fight against the evil sentinel armies!