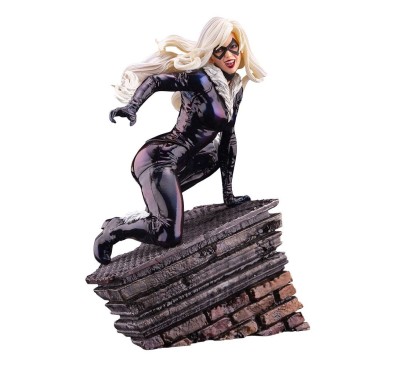 "WOMEN of MARVEL" shines a spotlight on popular female characters within Marvel. From the detailed sculpt of the figure to the realistic costume and facial expressions, each statue showcases the characters' "beauty" and charm while staying true to the series and personality. Black Cat is the next character to join this special "WOMEN of MARVEL" line in the ARTFX PREMIER series! Felicia Hardy has always been one of the most popular heroines in the Marvel Universe, and this crime fighter has been sculpted to look as though she is running throughout the various back streets of New York City. This rendition of Black Cat perfectly brings out her mysterious yet bewitching nature: from the transparent white hair to the detailed facial expression despite the size of the face (approximately 3.5 cm). With its dynamic pose and rich expression, it is made in the highest of quality thus far in the ARTFX PREMIER "WOMEN of MARVEL" series. The superb paint job recreates the true body line of Felicia, and the glossy nature of the bodysuit is also thoroughly rendered throughout. By using varying paint colors for each part of the statue, such as blue and purple, the colors reflect all kinds of light, bringing about the imagery of bright lights shining at night. The pose that brings out the best in her, the exquisite texture of her suit, and the nighttime situations of a big city have all been realistically fused together to create this fascinating statue. The "WOMEN of MARVEL" line also comes with premium packaging which has been beautifully designed and includes a certificate with a serial number to prove that it is the only one of its kind in the world. Be sure to get your hands on this unprecedented piece of sophistication to complement your collection.