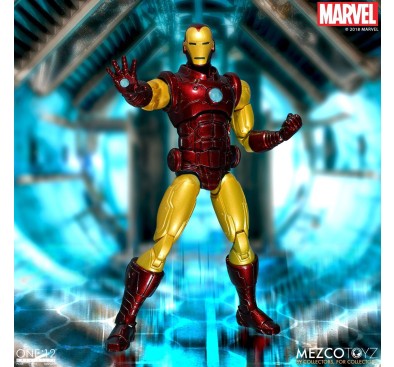 Iron Man, the secret identity of Tony Stark, blasts his way into the One:12 Collective. Billionaire inventor and arms manufacturer, Tony Stark, suffers a severe chest injury while being held captive by enemy forces. Stark is forced by to build a weapon of mass destruction, but instead creates a powered suit of armor that keeps his damaged heart beating and helps him escape captivity. Later, Stark augments his suit with weapons and other high-tech devices at his company, Stark Industries; and creates the suit to protect the world as Iron Man. The One:12 Collective Iron Man features a newly sculpted One:12 body specifically created for this figure and is designed with real metal components. His articulated visor can be worn in the standard closed position or opened to reveal the face of billionaire Tony Stark. The figure comes complete with an array of blast effects, as well as gauntlet rockets and hip rockets that can be interchanged with his hip discs. His signature arc reactor, the source of Iron Man's power, has a light up feature (battery included). Data primei aparitii: 31.08.2018

The Conjuring Universe Roto Plush Figure The Nun (The Nun...