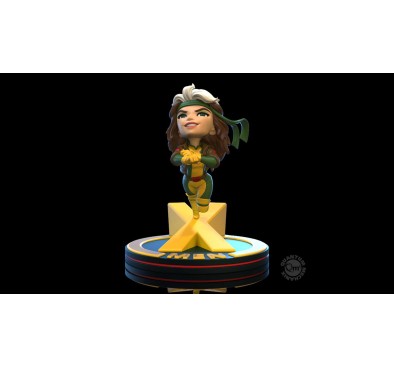 In our Rogue Q-Fig diorama, the team's very own southern belle leaps off the X-Men logo base and directly into the face of danger. Rogue is positioned so she is nearly suspended in mid-air, hovering just above her stand. Sporting her iconic white-streaked hair, Rogue is preparing to remove her glove and absorb the abilities of any who foolishly oppose her. Though she's barely touching the diorama, she's safely secured and ready to display. Just don't let her touch you.This QMx Q-Fig Diorama captures Rogue's essence, down to her signature leather jacket and headband, with hand-painted details and an X-Men display base. Rogue stands 4 inches tall including the base.Hailing from the American South, Rogue can't touch anyone without absorbing their personality, memories, abilities and powers. Both a blessing and a curse, Rogue's mutant powers have made her one of the most prominent members of the X-Men since the 1980s. Originally conceived as a villain, much of Rogue's history is shrouded in mystery.Rogue is just one in our series of Marvel Q-Fig Dioramas, so be sure to check out the rest of our amazing superheroes and villains. Collect them all and display them together!It stands approx. 10 cm and comes in a window box.