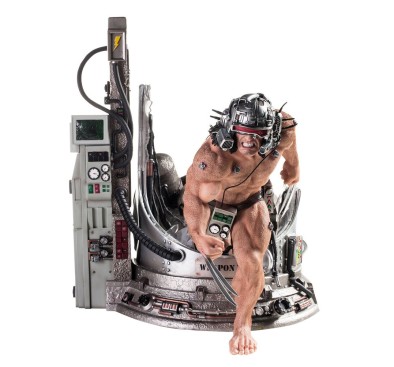 Wolverine was created by Len Wein, John Romita and Herb Trimpe in 1974 and his first appearance in comics was as a supporting rival of the Incredible Hulk. Born mutant, his powers include sharp senses, retracting claws and great regenerative ability (called a healing factor). His regenerative power slows down his aging, so his age is indeterminate. His baptismal name is James Howlett, but he took the name of his supposed biological father, Logan. He served in the American Civil War, World War II, was a secret agent for the CIA and the Canadian Secret Service, and was a guild of the Canadian government in an experiment (the Weapon X Program) in which his skeleton and claws were coated by indestructible Adamantium). With no memory of much of his past, he adopted the codename Wolverine and became one of the most important members of the X-Men group. He also served as a member of groups such as Tropa Alpha, X-Force and New Avengers. Iron Studios is proud to present the Wolverine Legacy Replica. This quarter scale statue is produced based on the conceptual art of Marcio Takara, from Chiaroscuro Studios and Marvel Comics. This hand-painted polystone Statue stands approx. 45 x 38 x 58 cm tall.