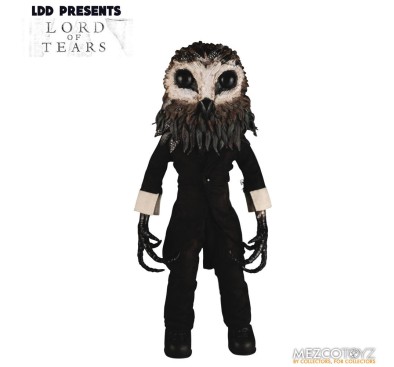 From the award-winning film 'Lord of Tears', LDD presents Owlman! In Lawrie Brewster's supernatural horror film, 'Lord of Tears', a school teacher is plagued by recurring nightmares and suspects his visions are linked to a dark incident from his past. Returning to his childhood home, he uncovers the disturbing truth. According to Cornish folklore, Owlman is described as a human-sized owl with pointed ears, glowing eyes, and black pincer-like claws. LDD Presents Lord of Tears: Owlman features an all-new head sculpt depicting the unnerving creature. Dressed in a three-piece suit with his claws bursting from his sleeves, Owlman is a nightmare that you'll spend your whole life trying to forget. LDD Presents Lord of Tears: Owlman stands 25 cm tall and features 5 points of articulation. He is packaged in a window box, perfect for display.