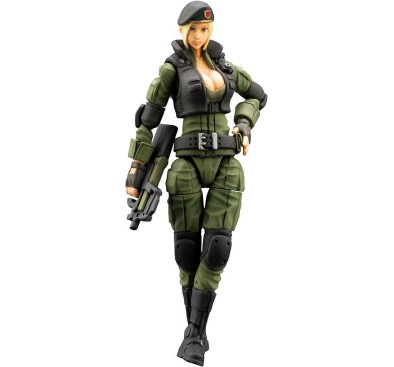 A female Governor model joins the popular Early Governor series! The head of the model has been made to become more realistic than the previously released models, and comes with four variations of heads to give customers optimal customization options. This model uses the same 22 points of articulation used in Frame Arms Girl Handscale Gou-rai, allowing for natural poses. The connector part on the HEXA G-R.A.M. piece for the back of the model has a 3mm part to attach the included handguns and rifles. Model Specifications: - This model is 71mm in size, and has 22 points of articulation - The kit includes four different head parts, allowing you to display your model wearing a beret, earmuff or with and without shooting glasses. - The kit includes four interchangeable hand parts. - The kit includes a variety of military inspired parts, allowing you to create your own customized soldier model: Handgun, Assault Rifle A (Bullpup Rifle), Assault Rifle B (Grenade Launcher Included) - Assault Rifle A (Bullpup Rifle) and Assault Rifle B (Grenade Launcher Included) can be attached to the model's back using the HEXA G-R.A.M. piece. - Can be attached to various HEXAGRAM products such as New Flying Base (sold separately) for action poses.