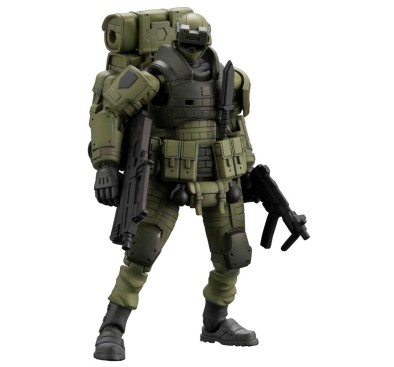 The equipment considered to be an "early type" of the Governor is supplied by a large range of companies due to its universality, and in many cases these units are available in a wide range of colors. The model type described here was developed for use in jungle environments. The backpack and supplies designed for use in small group or individual missions varies slightly by company, but there are few major differences. The small information terminal on the left arm is powered by the HEXA G-R.A.M. affixed to the unit's back, and can access a variety of networks in order to obtain information about the region or connect to a Hexa Gear unit. Early Governor Vol. 1 Equipment: - Assault Rifle - Bullpup Rifle - Sub-Machine Gun - Handgun - Combat Knife - Chest Rig - Alice Pack Model Specifications: - This model is a color variation of Early Governor Vol. 1 - This model comes with a variety of military inspired parts allowing you to create a well-equipped soldier. - The model comes with five head parts, including parts with shooting goggles and with or without helmets. - The model comes with six types of newly designed hand parts and three types of hands from Pawn: A1 for a total of nine hand parts. - The Alice Pack can be broken down in to parts, and each part is equipped with a 3mm opening or knob allowing you to connect them in a variety of places on the model. - The combat knife and handgun can be stowed in the sheath and holster which can be attached to the model's thighs. - The head parts where the soldier's face is visible are pre-painted. Included Items: - Early Governor Body x1 - 5 types of head parts x1 set - 9 types of hand parts (six new types) - Alice Pack x1 set - Assault Rifle x1 - Sub-Machine Gun x1 - Handgun x1 - Holster (with the handgun stored) x1 - Holster (with the handgun drawn) x1 - Combat knife x1 - Knife sheath (with knife stowed) x1 - Knife sheath (with knife drawn) x1