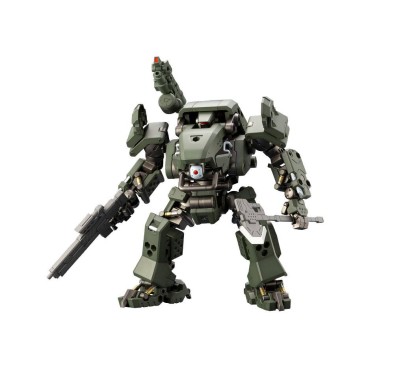 Bulkarm a (alpha) was utilized for a variety of purposes in the conflict that broke out amongst rival corporations. In addition to the standard version of Bulkarm a that was widely used throughout the world, specialized versions of the machine were also created by third party developers. As its name suggests, this version of the model was designed for use in jungle environments, with handling designed to navigate dense jungle foliage. Instead of the 120 mm cannon of the standard Bulkarm a, this model is equipped with a folding howitzer, a small rifle, and an axe for clearing barriers. Another point of differentiation is the updated sensor unit on the model's head. Weapons: - Folding Cannon - Battle Axe - Long Rifle Model Specifications: - This model is a color variation of Bulkarm a with alternate weapons. Instead of the 120mm cannon, this model includes an updated version of the out of production M.S.G. (Modeling Support Goods) Weapon Unit 05 Battle Axe and Long Rifle and Weapon Unit 03 Folding Cannon. - The model's cockpit can open and close, allowing you to place a separately sold governor unit inside. - The folding cannon can be attached to various places on the model using the included HEXA G-R.A.M. poly cap. - The folding cannon can be converted into a pile bunker by changing out some of the parts. - The head sensor is pre-painted, giving the model a completed look with no painting required. - The model features several points of articulation, allowing it to be posed in a variety of poses. Included Items: - Bulkarm a main body x1 - Battle Axe x1 - Long Rifle x1 - Folding Cannon x1 - HEXA G-R.A.M. poly cap x1