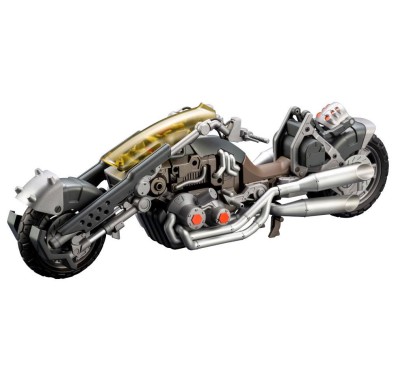 This large-scale vehicle was first seen being used by the mysterious Governor Zoanthropus Lowe, and became known as "Bandit Wheel" due to the Governor's merciless plundering of HEXA G-R.A.M units from both sides of the fight. The HEXA G-R.A.M storage seen at the core of the model constantly emits red light that fuels an external combustion engine, giving Bandit Wheel an immeasurable source of ferocious power. It is assumed that Zoanthropus Lowe throws stolen HEXA G-R.A.M units into the storage unit to continuously increase the power of the vehicle. Bandit Wheel's origins are unknown, and there are no Hexa Gear currently in operation that have comparable specifications. It is assumed that Zoanthropus created Bandit Wheel alone using foraged parts from an area known as "The Wreckage" where parts from Hexa Gear and other machinery are disposed. When the model is in the default configuration, the rear tires are grouped as one wheel, but when in hover mode the wheel expands to the left and right to act as revolving levitation devices. The frame that supports the front tire has artillery capabilities, and it is confirmed that the machine can be converted into an Aiming Mode. Like the Governor that pilots it, little is known about Bandit Wheel, other than the fact that the model's speed and travel distance capabilities far exceed those of any standard third generation Hexa Gear. Weapons: - Plasma Cannon - HEXA G-R.A.M Storage - Tool Box - Sub-Machine Gun - Hand Gun - Double Barrel Shotgun Model Specifications: - The model can be converted between Bike Mode, Hover Mode, and Aiming Mode. - The tires are made of PVC in order to achieve a high level of detail. - There is a Governor-sized hammer, wrench, and metal cutter stored inside the Tool Box behind the seat. - The clear red HEXA G-R.A.M equipped to the HEXA G-R.A.M Storage can be removed and attached to other places on the model. - The raised "Demon's Symbol" on the eye sensor on the front hood is made of clear plastic. Included Items: - Sub-Machine Gun (x1) - Hand Gun (x1) - Double Barrel Shotgun (x1) - Tool Box (x1) - Tool Box suspension unit (x1) - Hammer (x1) - Metal Cutter (x1) - Wrench (x1) - Clear Red HEXA G-R.A.M (x5) - Rear tire attachment part (x1) - Muffler pipe attachment part (x1) - Archive Card (x1)