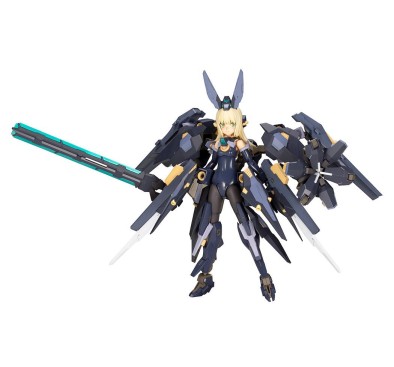 "The latest robot from the Frame Arms line to join Kotobukiya's original spin-off series Frame Arms Girl is Zelfikar! Takayuki Yanase's mech design is expertly recreated into the adorable FA Girl form by illustrator Humikane Shimada! Model Specifications: - Zelfikar comes with two unique weapons, a prototype light-wave emitter for the right arm and an offensive shield system for the left arm. - Zelfikar's armor can be reconfigured to recreate "blast shield mode." - The base of the blast shield can be used as armor. - The included segment rifle comes with an updated blade part. - The kit includes a special support arm. - The sculpting of the head, face parts, hair, chest, and rear of the base model are all new. - The kit includes three face parts: smiling/looking left, looking down, and crying. - The model can be turned into a bunny girl by attaching the included tail part. - The model's joints are updated from the original Baselard model, giving Zelfikar an impressive range of movement while also maintaining the model's appearance. - The model's hands use ball joints that allow for a range of expressive poses. - The kit includes six sets of PVC hand parts, and the kit is also compatible with hand parts from existing Frame Arms Girl kits. - The kit includes decals for the eyes and other markings. - Zelfikar can be built without armor in her basic mode, fully decked out in mechanical armor, and anything in between by changing out the parts. - The kit includes shoulder attachments for arm extension parts that are compatible with the arms from Frame Arms Baselard and other Frame Arms model kits. - The 3mm connections on the arms and legs are compatible with equipment from the M.S.G and Frame Arms series. 2019-08-02