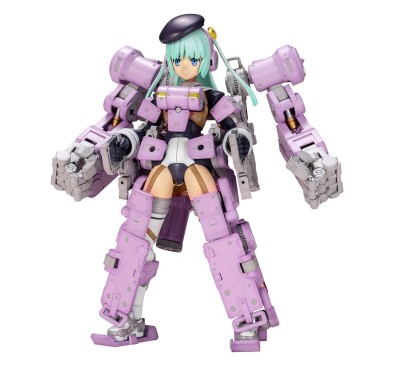 The latest model to join Kotobukiya's popular Frame Arms Girl line is GREIFEN Ultramarine Violet Version! Based on the original Frame Arms mech designed by Tomotake Kinoshita, Greifen was converted into the adorable Frame Arms Girl form by Tomotake Kinoshita himself! This GREIFEN Ultramarine Violet Ver. is a color variation of the original Greifen that was previously released by Kotobukiya. Model Specifications: - This model comes in an all new violet mecha coloration with a navy blue and white sailor outfit underneath the armor. - Use the body from the original Frame Arms Girl Greifen to assemble this new Greifen with an all white sailor outfit-like outfit underneath the mecha. - The violet mecha combination can be attached to previously released Hresvelgr models as well. - The signature sub-arms of the Frame Arms Greifen are recreated in the Frame Arms Girl Greifen Ultramarine Violet Ver. as an oversized mecha suit. - Similar to the Frame Arms Hresvelgr, which was also designed by Tomotake Kinoshita, Greifen's mecha suit can be converted into a two-legged vehicle which is also compatible with other Frame Arms Girls. - The fingers on the mecha hands are moveable. - The model comes with a clear helmet based on the helmet parts from the original Frame Arms Greifen. The Frame Arms Girl also comes with modified hair parts to use with the helmet. - In her unarmed form, Greifen can use the hand knife, rocket launcher, and machine gun as weapons. - The model comes with three interchangeable face parts: "looking forward," "looking right," and "smiling/looking left." - The face parts are pre-printed, allowing you to easily recreate the model's default appearance without paint or decals. - The included beret is fully detachable. - The model uses the same joint parts as the Hresvelgr Frame Arms Girl. - The model can be displayed with either a necktie or mecha parts based on the Frame Arms Greifen. - The connection shaft for the thighs is a sliding joint, allowing for a wider range of movement. - The wrists are equipped with a ball joint that are compatible with the hand parts from existing Frame Arms Girls, allowing for a wide range of poses and customizations. - The model comes with four types of hands (closed, open 1, open 2, holding weapons). - The model kit contains decals for the eyes and other markings. - The mecha suit is equipped with 3mm connection points, making it compatible with existing parts from the M.S.G and Frame Arms series.