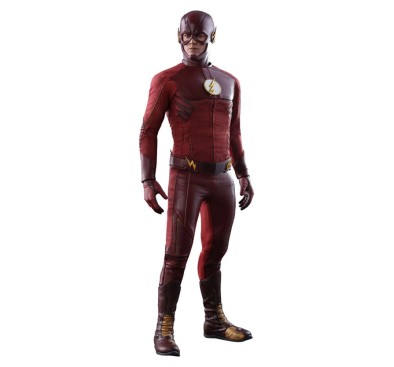 Run, Barry, run. The Flash is sprinting back into popularity at unimaginable speeds thanks to the new television series! After being struck by lightning, the ordinary police investigator Barry Allen wakes up and discovered that he's been granted the gift of superhuman speed. With the heart of a hero, he becomes The Flash to fight crime and protect the innocent from dastardly rogues. Celebrating the new season of The Flash television series, Sideshow and Hot Toys present The Flash Sixth Scale Collectible Figure from the DC collection! The highly-detailed figure is sophisticatedly crafted based on the appearance of Grant Gustin as The Flash/Barry Allen in The Flash TV series. This sixth scale figure includes a newly developed head sculpt with remarkable likeness and a brand new masked head sculpt, a finely tailored Flash jumpsuit with yellow accents, several interchangeable chest pieces with Flash's iconic bolt lightning symbol, a classic Flash helmet, lightning effect accessories attachable to Flash's body, and a dynamic figure base with specially designed character backdrop. He is faster than the speed of light! So be sure to pre-order the figure before it's gone!