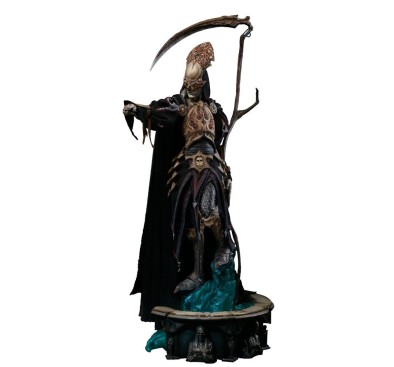 Sideshow is proud to introduce Death: Master of the Underworld, an original character design from our Court of the Dead Premium Format™ figure collection. "The light will forcefully define you. While in darkness, anything is possible." Death is feared in the Mortal Realm as the grim reaper of souls. While it is true that he ushers soulborn along to Heaven or Hell, that is but a mere fraction of the larger, more horrifying truth. Neither salvation nor damnation awaits mortals in Heaven and Hell. Death delivers human souls to a life of servitude in the eternal war between Heaven and Hell. Death himself struggles against his own base, destructive nature. He desires to become a Shepherd of Souls, guiding mortals to a truer spiritual balance, instead of eternal war. And so, Death, master of the Underworld, is biding his time. The Alltaker - for that is what he is known as in the land of the dead - is carefully, steadily, secretly plotting a rebellion against the fanatical Celestial Realms. Product Size: 76 x 30 x 44 cm