Court of the Dead Graphic Novel Shadows of the Underworld English 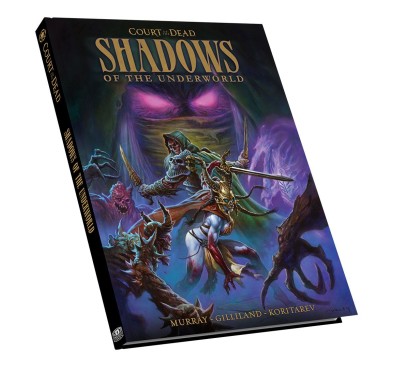 Exraile whispers these few words into Queen Gethsemoni's ears, and in doing so kicks off an epic hunt for the diabolical leader of the mysterious Severed Shadow - a group of subversive Underworld zealots. The Court of the Dead: Shadows of the Underworld Original Graphic Novel takes readers on a journey through the twisted underbelly of the Land of the Dead, where the hunger for power stolen from mortal souls can create monsters to challenge even Death's most stalwart warriors. "Shadows is a big landmark for us because it's really the first big standalone story that we are telling in relation to the Court of the Dead," says Sr. Brand Manager Ricky Lovas. "We have released small character studies and a universe bible, but this is everyone's first chance to really go on an adventure with these characters and get to see them kick some raker ass while doing so." Shadows of the Underworld features 112 pages of action-packed story and exclusive behind-the-scenes content between two hardcovers, beautifully emblazoned with an original cover scene by world-renowned artist Alex Horley. The 98 pages of the Shadows story itself are rendered in impressive detail. "Master Illustrator Ivan Koritarev treated each and every comic panel with painstaking care," says Brand Director Anna van Slee. "It is common in comics for background details to be vague, with suggestive linework, but Ivan imparted evocative elements to un-named characters; beings just walking down the street or standing in crowds. He filled out architectural elements on buildings, and flora and fauna in the environment. The result is not just a beautiful comic with incredible detail; Shadows transports the reader to the Underworld." The Court of the Dead: Shadows of the Underworld Original Graphic Novel is a deluxe and complete tale for both established fans and newcomers alike to witness the Court of the Dead facing off against a magnificent villain.