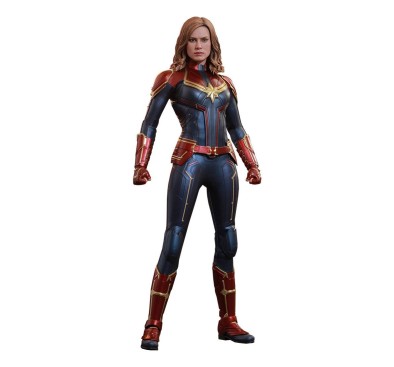 One of the most anticipated movies of 2019, Captain Marvel is getting ready for her close-up! The film follows an Earth-trained pilot Carol Danvers a.k.a. Captain Marvel, a powerful hero with strong sense of duty and honor. In the middle of a galactic war between two alien races, she protects the Earth from extraterrestrial threats with her unimaginable ability. Given immense popularity of the character, Hot Toys is proud to introduce Captain Marvel 1/6th scale collectible figure prior to the epic release. The movie-accurate collectible is specially crafted based on the image of Brie Larson as Carol Danvers/Captain Marvel from the film. It features two interchangeable head sculpts including a newly developed helmeted head sculpt with LED light-up function that accentuates Captain Marvel's superpower and a newly developed unmasked head sculpt, two pieces of Mohawk hair sculptures, a newly developed body equipped with LED light-up function on both sides of the forearms, an iconic Captain Marvel costume in metallic red and blue with a gold star emblem on chest, wearable energy-blasting effect accessories, and a movie-themed figure stand. The latest Captain Marvel collectible figure is a perfect way to show off your super powers!