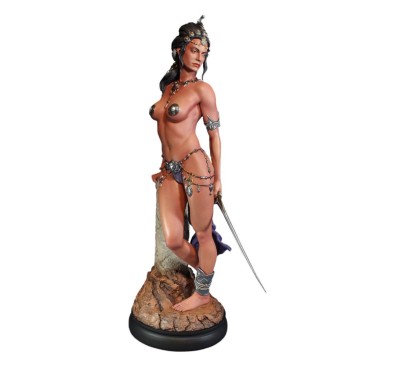 Sideshow and Quarantine Studio present the Dejah Thoris Princess of Mars Statue!Dejah Thoris is a fictional character and princess of the Martian city-state/empire of Helium in Edgar Rice Burroughs' series of Martian novels. She is the love interest and later the wife of John Carter, an Earthman mystically transported to Mars. She plays the role of the conventional damsel in distress who must be rescued from various perils, but is also portrayed as a competent and capable adventurer in her own right, fully capable of defending herself and surviving on her own in the wastelands of Mars.Inspired by the artwork of Jay Anacleto, this 1/5th scale Dejah Thoris Princess of Mars collectible statue measures 16.625 inches tall with a base that is 5.75 in diameter. Digitally sculpted by Ehren Bienert and painted by David Fisher. This limited edition serially numbered statue is cast in cold cast resin and packaged in a custom full color box. 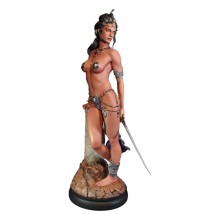