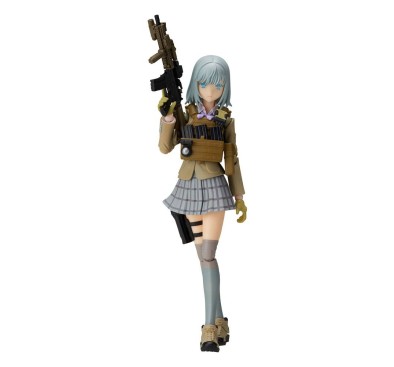 Rikka Shiina headed out again as a figma wearing her elite school tactical uniform!From TOMYTEC's 'Little Armory' 1/12th scale weapon model series comes a figma of one of the series characters - the elite tactical girl's school member, Rikka Shiina!· The smooth yet posable figma joints allow you to act out a variety of different scenes.· A flexible plastic is used in specific areas, allowing proportions to be kept without compromising posability.· She makes use of drawer joints in her shoulders allowing her to easily wield the 'Little Armory' weapons.· A plastic model runner kit for a Special Forces Carbine Rifle is included. The model is limited to the figma release and includes a holographic sight, muzzle booster, laser module, light, dual switch and foregrip as optional parts to attach to the weapon.· She comes with both a standard expression and a more serious expression for combat scenes.· Optional parts include an alternate skirt to pose her crouching, as well as a handgun with mounted light that can be holstered, and a transceiver.· The background sheet of the product comes with two different target practice targets that can be cut out and displayed with her as a training ground.· The package includes an original illustration by illustrator Haruaki Fuyuno.· An articulated figma stand is included, which allows various poses to be taken.- Who is the Little Armory's Rikka Shiina? -Rikka Shiina is one of the characters seen on the Little Armory packaging, illustrated by Haruaki Fuyuno. She plays a part in the defense of the region as one of the students at the Jyoushuu Girls Academy. 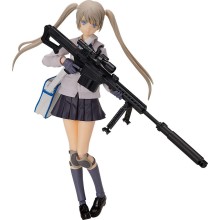 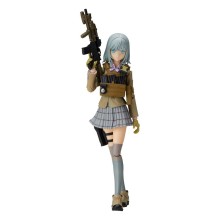