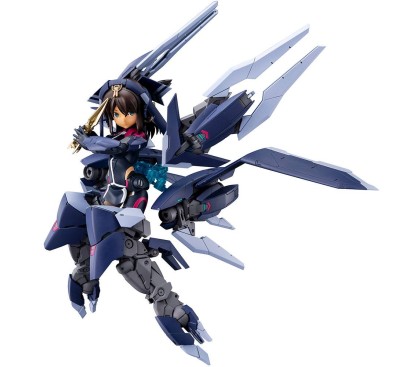 The latest model to join Kotobukiya's original Megami Device series is top actress Sitara Kaneshiya in her Tenki form as can be seen in the popular mobile game, Alice Gear Aegis! This kit also includes a special code to use in the game! The character and gear were designed by Kanetake Ebigawa, and the ace suit was designed by Pyramid, Inc! Sitara Kaneshiya [Tenki] uses a newly revamped model based on the previously released Sitara Kaneshiya model kit. This model kit is the first rendition to be based on the ace suit costume that was worn in-game. Eye decals have been renewed with R66's charm, keeping the model kit as close to the original as possible. Like the other models in the Megami Device series, Sitara consists of the base "machinika" body designed by Masaki Apsy as well as signature armor and weapons designed specifically for this addition to the Megami Device line. To stay true to the proportions from the game, the ace suit for this model kit was recreated based on "Sitara Kaneshiya Ver. Karwa Chauth's" design as a shorter machinika. Model Specifications: - The kit will include a present code for use in the game. - The kit includes three different pre-printed renewed face parts (one of which is a new design). - The ace suit was recreated based on a renewed design by Masaki Apsy that takes into consideration of the balance of body proportions for shorter machinika. - The kit includes a variety of gear parts allowing users to recreate a variety of combat scenes. - The model can be constructed with her signature gear in "Armed Mode," or without armor and weapons in "Unarmed Mode." - The kit includes a variety of translucent effect parts to recreate flying or shooting poses. - The model is equipped with several 3mm connection points, making it compatible with existing M.S.G, Frame Arms, and Frame Arms Girl weapons and armor. - The kit includes a variety of decals for the eyes and other markings.