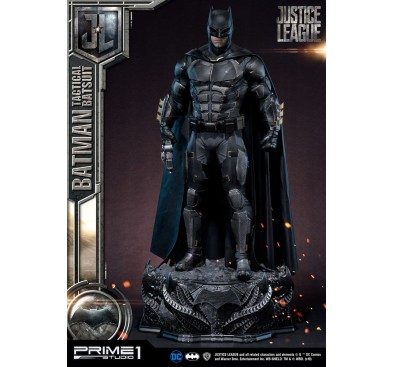 Bruce Wayne is the billionaire owner and CEO of Wayne Enterprises, and a costumed vigilante operating in Gotham City, New Jersey known as the Batman. Fueled by his restored faith in humanity and inspired by Superman's selfless act, Bruce Wayne enlists the help of his newfound ally, Diana Prince, to face an even greater enemy. Together, Batman and Wonder Woman work quickly to find and recruit a team of metahumans to stand against this newly awakened threat. But despite the formation of this unprecedented league of heroes: Batman, Wonder Woman, Aquaman, Cyborg and The Flash it may already be too late to save the planet from an assault of catastrophic proportions. Batman wears the Tactical Batsuit in order to face a very powerful enemy. It is an upgraded version of the regular Batsuit. It has goggles to help him pilot his vehicle, and light armor to help him endure the hits while still being able to move and throw quick punches. The suit is made with attention to details and crafted of high-quality materials to meet the demands of every customer. This version has a total of two interchangeable right-hands, the Grapple Gun and the Gripped Hand. Do not miss the chance to add this amazing Batman in his Tactical Batsuit to complete your Justice League Film collection! Specs: - Size approximately 88 x 43 x 34 cm - Limited edition - One (1) designed theme base - Two (2) interchangeable right-hand holding the Grapple Gun and Gripped Hand