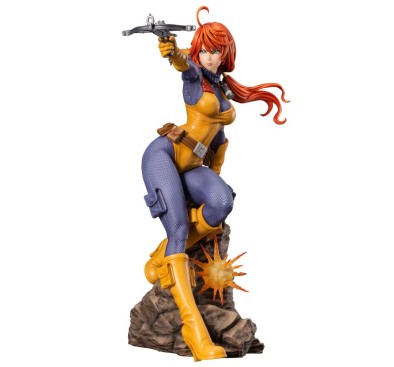 Kotobukiya's elite Bishoujo Statue line has brought you beautiful characters from all manner of anime series, DC and Marvel comics, Star Wars, video games, and much more. Now a new collection celebrates the world's first series of action figures, Hasbro's G.I. Joe which tells the tale of an elite group of heroes fighting against the evil organization Cobra that's bent on world domination. In this new line of 1/7 scale statues, the colorful characters of G.I. Joe are reborn as you've never seen them, and to start it all off is the counter intelligence expert from the G.I. Joe team: SCARLETT! Based on rendering by Shunya Yamashita, this real American hero proves her courage in battle, vaulting over a rock to take aim at Cobra minions. Scarlett's signature flowing red hair and two-piece blue and yellow bodysuit are recreated in stunning detail, and while remaining faithful to the original G.I. Joe series the outfit has also been upgraded to represent the advanced high-tech equipment used by the team. Particular highlights of this scene include the hero's stern yet beautiful facial portrait and the incredible texturing on her bodysuit. And of course, just like the original action figure, Scarlett comes equipped with her XK-1 power crossbow! Sculpted by Takaboku Busujima (BUSUJIMAX), the scarlet-haired weapon master is over 8 ½ inches tall (1/7 scale) as she traverses the rocky terrain of her display base. Make sure Scarlett is on hand to protect your collection from the schemes of Cobra, and watch out for more G.I. Joe Bishoujo statues coming soon. Yo Joe!