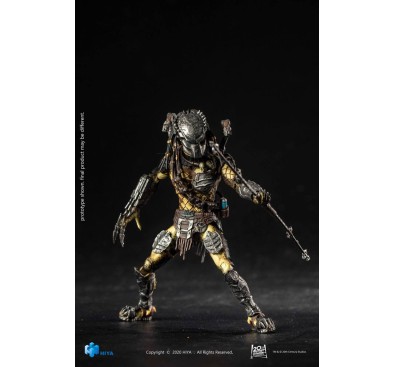 As a Yautja ship leaves Antarctica in the aftermath of Alien Vs. Predator, it carries an extra, hidden passenger. A facehugger has implanted in the body of the Predator known as "Scar", leading to a new Xenomorph hybrid. This new "Predalien" quickly overruns the vessel, leading to a crash outside a small Colorado town. Before dying, the last survivor sends a distress signal to his fellow hunters. Will the call be heard quickly enough?The hero Yautja from 2007's Alien Vs. Predator: Requiem was named "Wolf", inspired by the fixer character from Pulp Fiction. This Predator is of elite rank, and is marked by his scarred face and missing tusk. Hiya Toys debuts this heavily-armed hunter with this 1:18 scale figure (app. 4" tall), derived from ADI's design. Wolf features many accessories standard to Predators, includingwristblades, plasmacaster, and shruiken. But it's Wolf's whip and handmade plasma pistol that set him apart from the pack! Wolf also comes with multiple hands, as well as a pegged stand for ease in posing.