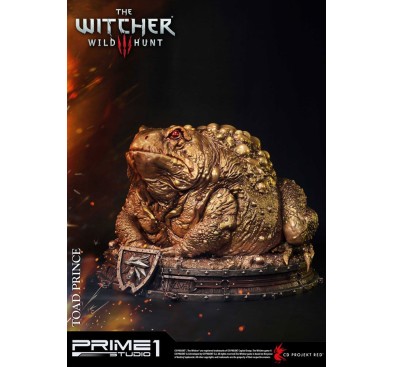 Prime 1 Studio and CD Projekt Red are proud to present PMW3-05GL: Toad Prince of Oxenfurt (Gold version) from Hearts of Stone expansion for The Witcher 3: Wild Hunt. Geralt of Rivia takes a contract from Olgierd von Everec to slay a monster in the sewers of Oxenfurt. He runs into Shani, who came down with a group of soldiers to collect venom from the so-called Toad "Prince". In their search for the beast's lair, they find bodies of its victims, men who thought they could slay it and women who thought to break its curse with a kiss and win a prince. Geralt confronts the Toad "Prince" and eventually slays it by slicing its underbelly, though he passes out in the attempt. But as the Toad laid dying, it reverted into the form of a man. Geralt is then taken prisoner by a group of Ofieri, and learns in the brig that the man was the prince of Ofier and his subjects had come to cure him. But since they've failed, they're taking Geralt back to their homeland so their king could execute him. After being freed by Gaunter O'Dimm, Geralt later learns from O'Dimm and Olgierd that the Ofieri prince was once engaged to Olgierd's beloved Iris when the latter was destitute. In anger, Olgierd managed to inflict a curse upon the prince, transforming him into the hideous creature Geralt slayed.Features: - Size approximately 34 x 47 x 47 cm- High-Quality translucent resin for a lifelike skin effectLimited to just 250 pieces worldwide.