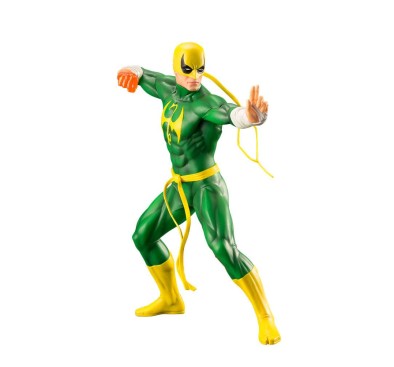 Kotobukiya's Marvel Comics ARTFX+ statues have brought you Avengers, X-Men, and most recently Spider-Man and characters from his world, but now we turn our attention to the street-level heroes of the Defenders. Kotobukiya's Defenders ARTFX+ series is a collaborative effort between renowned Marvel Comics artist Dale Keown and Junnosuke Abe (Restore), the sculptor behind many of Kotobukiya's Marvel statues. Standing approximately 20cm tall at 1/10 scale, the Defenders are the perfect addition to your Marvel collection! The final entry in the Defenders ARTFX+ series is the one and only Iron Fist, who made his return to New York City after his intensive training in K'un-L'un. Iron Fist's costume is based on the one designed by David Aja for The Immortal Iron Fist, which follows the current Iron Fist (Danny Rand) as well as the origin stories of the previous generations of the Iron Fist. The Iron Fist is a practitioner of martial arts, and can focus his "chi" into his fist using the power granted to him by defeating the legendary dragon Shou-Lao the Undying. Iron Fist's posing shows off his muscular form and martial arts prowess, his clenched fist glowing orange as he focuses his "chi." Like the other statues in the ARTFX+ series, Iron Fist has magnets in his feet that allow you to display him firmly on the included metal base. The statue's 1/10 scale makes him perfect for displaying alongside the rest of the Defenders or with Luke Cage to form the original "Heroes for Hire."