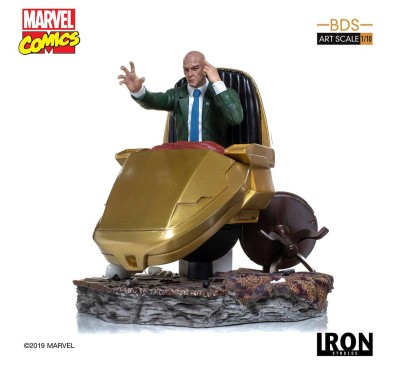 Created by Stan Lee and Jack Kirby in 1963, Charles Francis Xavier known as the "Professor X" is the mentor and founder of the X-Men. Charles is among the most powerful telepaths in the Marvel Universe, with powers that include Telepathy, Telepathic Illusion, Mental Manipulation and Psionic Burst. He is the creator of the Xavier School for Gifted Youngsters, where young mutants are trained to learn to control their powers and to fight for the "peaceful coexistence" between humans and mutants. His creation, according to Lee and Kirby, was inspired by actor Yul Brynner and in the stories written by screenwriter Chris Claremont, had his personality based on Martin Luther King Jr. From the Marvel universe comes this 1/10th scale statue of Professor X! The Polystone statue measures approx. 18 x 16 x 19 cm and comes with matching base. Features: - Limited edition - Made in polystone - Hand painted - Includes extra exchangeble head with Cerebro interface helmet - Includes base - Professor X is part of the upcoming X-Men BDS