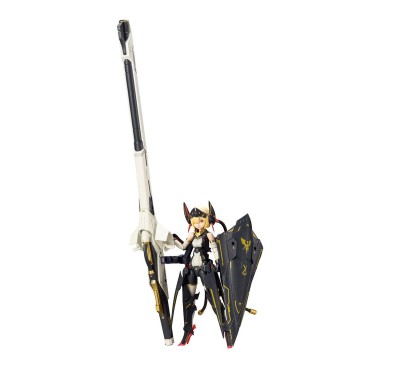 "The 10th entry in the popular Megami Device line is BULLET KNIGHTS Launcher! "Megami Device" is a plastic model kit series combining Bishoujo-style beauties and heavy-duty weapons and armor. Each character has a main body, or "machinika," designed by Masaki Apsy along with a huge array of interchangeable parts to outfit her as you like! The 10th original character to join the series, BULLET KNIGHTS Launcher is based on character art by Yasutaka Isegawa! Product Specifications: - Launcher's oversized launcher and shield can be attached to the arms that extend from her back. The kit also comes with special bases for the equipment for even more support. - The weapon can be reconfigured into "Ride Mode" to serve as a vehicle for the Megami. - The launcher can be separated into three parts, and the arms on the back have several points of articulation, allowing the model to be displayed in a variety of poses. - The tube that extends from the back of Launcher's head is created with wire, allowing it to be bent and displayed in different designs. - The kit includes decals for the eyes and metallic decals for the markings. - The kit comes with three interchangeable face parts. - The model can be built in knight inspired "Armed Mode," or without her armor in "Unarmed Mode." - The "Machinika" body base boasts an impressive range of flexibility, allowing it to be displayed in a variety of natural poses. - The model is equipped with several 3mm connection points, making it compatible with existing M.S.G, Frame Arms, and Frame Arms Girl weapons and armor."