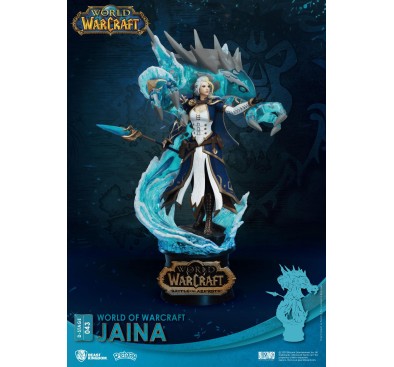 Lady Jaina Proudmoore is considered as one of the most powerful mages in all of Azeroth, and more importantly the strongest human sorceress alive! As the founder and former Lady of Theramore Isle, she managed to take leadership of the Kirin Tor, becoming the most respected sorceresses in the realm. During her time at the Kirin Tor, Jaina became obsessed with taking down the Burning Legion, and its crazed demons any way she could. Having succeeded in defeating their leader Archimonde, she ascended the ranks, becoming Grand Magus of the Kirin Kore and ultimate ruler of the Dalaran, a position solidifying her as a legend! The Entertainment Experience Brand is back again with the next installment in the new World Of Warcraft Battle for Azeroth line of D-Stage dioramas! Beast Kingdom proudly presents a new phase for character from the legendary series created by Blizzard. The newest release, focusing on Jaina: the Water Mage, depicting a strong and resilient sorceresses ready for the ultimate showdown with demons of the Burning Legion. With a focus on fine details, the character is filled with determination and the will for success! Every part of Jaina's costume is delicately recreated, and the main water elemental is summoned right behind her with a translucent blue layer effect. So whether you are a Blizzard fan or loyal player of the World of Warcraft, Beast Kingdom's new range is sure to be a hit with gaming collectors the world over. Don't forget to add DS-043 to your new line of gaming collectables today! The PVC diorama stands approx. 16 cm tall and comes in a plastic transparency blister box.